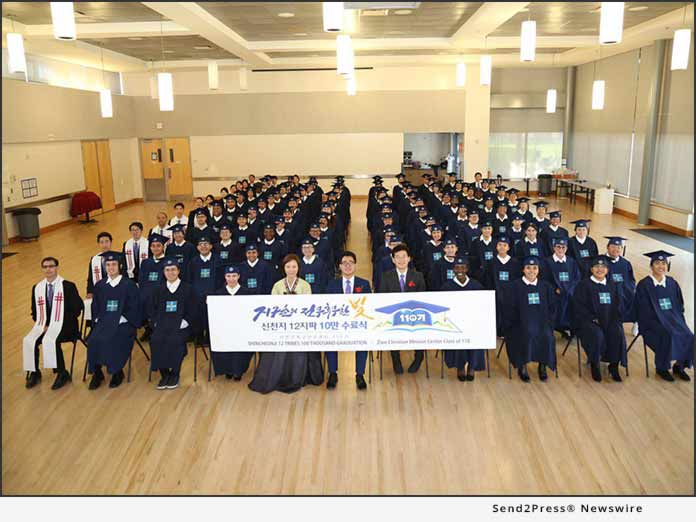 SAN FRANCISCO, Calif., Nov 13, 2019 (SEND2PRESS NEWSWIRE) — On November 10, 2019, Shincheonji church of Jesus, the Temple of the Tabernacle of the Testimony held one of the world’s largest graduation with the count of 103,764 graduates. In addition to the 100,000 graduates in South Korea, it was also held simultaneously around the world from school locations in Asia Pacific, Europe, Africa, and the United States including Los Angeles, San Francisco, Washington DC, Chicago, New York, as well as in South and Central America.

The graduation was broadcast live within major cities in Korea and Internationally for the graduates overseas to participate.

This graduation is the largest graduation from a single denomination worldwide. Adding the combined total number of graduates together would equal to 100 churches of 1,000 congregation members, which is greatly different from the drastic fall of the number of congregation members seen globally in the world of religion and it marks a historical triumph for theological studies especially when seminary education enrollment has declined for the past decade according to a study conducted by the Association of Theology Schools.

Shincheonji is the only place in the world where 100,000 students graduated after completing an in-depth theology program which is open to students wishing to study the Bible and the prophecies from the book of Revelation. Free of coast consisting of beginners, intermediate, and advance content for 6months to a year and graduating after passing the final exams.

Of course it is incredible enough to see 100,000 students graduating from a single denomination; however, what is more shocking is that Shincheonji – which is teaching the fulfillment of Revelation and has been growing at an incredibly rapid pace since 1984 is labeled as a “cult” by the Christian world of the Republic of Korea especially through the CCK (Christian Council of Korea). Despite criticism Shincheonji has received, such as major allegations that “Shincheonji claiming the founder of Shincheonji being Jesus,” and “students are coerced to learn and brainwashes the people with their teaching.” The graduates reported that those are all false accusations and the reality they’ve witnessed is completely different.

“For the past 8 months within my Bible study, I was checking to see if any of the criticisms against Shincheonji were true, from making people quit jobs, divorce, and leave their homes, to forcing us in believing the founder of Shincheonji, Mr. Mann Hee Lee as Jesus, I realized that those were false rumors and far from the truth. Anyone can study the Bible according to their free-will and if you do not want to study the Bible you can stop studying at any time. I am thankful that I had a chance to study the Bible for the past 8 months and to see for myself that Shincheonji’s teaching of the Bible is biblical and logical,” said Graduate Lynn Maldonado.

The growth of Shincheonji is expected to grow exponentially after the graduation. With the evangelism rate of the graduates being over 100%, currently there are 200,000 plus students that are enrolled in the theology program. If Shincheonji continues to grow at this pace, then within 3 years it will reach a million congregation members, and the status quo of the religious world will change.

“All this is not of man’s power but of God’s power.
All this is the work of God’s miracles.”

This press release was issued on behalf of the news source, who is solely responsible for its accuracy, by Send2Press Newswire. To view the original story, visit: https://www.send2press.com/wire/shincheonji-church-of-jesus-graduates-100000-students-worldwide/

4,000 'Recovered' Members of Shincheonji Church of Jesus Donate Plasma for the Third Time to Combat COVID-19