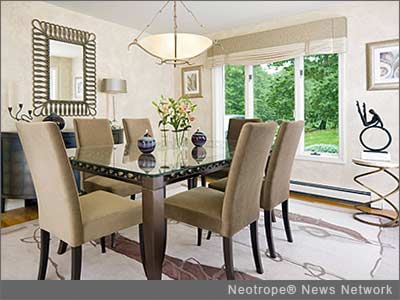 "Our interior design schemes often include creating interior architectural detailing – designing ornate wrought iron railings, fireplace mantles, built-ins and floor inlays," says Terry. "We provide our own drawings, and manage the process from fabrication to installation. This in particular allows us to provide real value to the client – in terms of not only making a significant impact in the comfort and functionality of their home but also many of these improvements increase the real monetary value to the home itself."

The firm's niche, says Terry, is in the use of design elements rooted in a historical style.

According to Terry, they go beyond the terms traditional, transitional, and contemporary and expose their clients to the various period styles that form a continuum between past and present as a basis for their design scheme.

From the English to American Arts and Crafts movement to Art Deco and Mid Century Modern design, Donna Terry's extensive knowledge of era-appropriate design elements for window treatments, furniture, tile and moldings is one of her firm's greatest assets.

To view more of the firm's projects and learn more about the interior design services offered in greater detail, visit her new firm's site http://bostondesignandinteriors.com/ .

In one home, which underwent two full-scale remodeling ventures, Terry worked off the architecture of the home by acclaimed Royal Barry Wills Associates in the tradition of Frank Lloyd Wright. Throughout the home she utilized many of the stylistic influences of the Arts and Crafts movement – use of naturalized forms as motifs, craftsmanship in wood and metalwork, natural elements like copper and natural materials like domestic slate. Complementing the open-plan design and the time period the house was built, the home was furnished in a mid century modern style. To view this project in its entirety click here: http://goo.gl/zxfXBe .

In another newly built contemporary home, Terry embraced the modern aesthetic more closely associated with the early part of the 20th century. Pattern was used in this home pared down to checkerboard, squares and circles, an aesthetic often used by the Weiner Werkstatte (Vienna Workshops). Terry tempered these geometrics with the purposeful use of spirals and sensuous curves to impart a less harsh and more feminine quality to the design. This home's dining room won a Design Award from the International Furnishings and Design Association and Design New England. To view this project in its entirety click here: http://goo.gl/KWzAVT .

CEO and lead designer Terry, with nearly 20 years of award-winning experience in design, serves clients in Boston, New England, and beyond.

While the Back Bay address is convenient for Boston and Metro West clients, Terry continues to enjoy a high-profile presence on the North Shore. The Danvers Historical Society has awarded her the largest room in the Glen Magna mansion to design for the society's fund-raising project to preserve the National Historic Landmark building – the Derby Summer House – that sits on the property. Glen Magna is the former summer retreat of the Peabody-Endicott family, first purchased by shipping magnate George Peabody – at one time one of the wealthiest men in the United States.

With an expertise in Art Deco and Neoclassical design styles, Terry is returning the 20 foot by 40 foot drawing room back to the 1930's. She is using the Egyptian fireplace, which the Endicotts bought in Egypt, as the starting point for her design scheme. To view Terry's hand-drawn rendering of a section of the soon-to-be transformed drawing room and learn more about her design planning on this project – visit Terry’s blog at: http://bostondesignandinteriors.com/donna-terry-to-design-famous-glen-magna-estates-drawing-room/ .

Copyright © 2013 MassachusettsNewswire™ and Neotrope®. Massachusetts Newswire is a publication of the Neotrope News Network and a TM of Neotrope.