BOSTON, Mass. /Massachusetts Newswire/ — Governor Charlie Baker and Lt. Governor Karyn Polito this week (1.6.20) joined legislators, religious leaders and advocates for a ceremonial signing of key sections of the recently-enacted supplemental budget that will triple the funding available this year to help Massachusetts houses of worship and other nonprofit groups enhance their security against hate crimes and terrorist attacks. 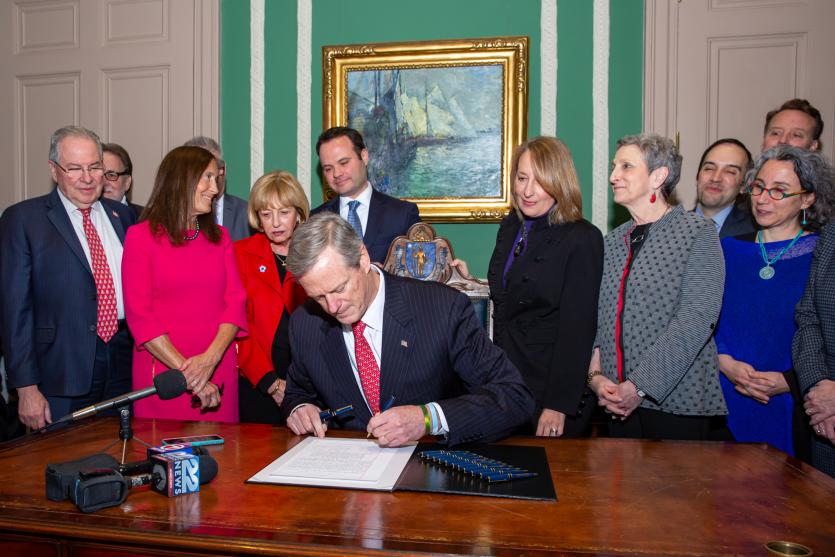 “Massachusetts is a welcoming community that embraces people of all faiths, and it’s important that people across the Commonwealth have the opportunity to come together with neighbors and worship without fear,” said Governor Charlie Baker.“These funds will assist houses of worship and other community-based institutions across the state in preserving their safety from those who would do them harm.”

“Recent tragedies across the country reveal a growing need to protect the well-being of worshippers here in Massachusetts,” said Lt. Governor Karyn Polito. “The Commonwealth Nonprofit Security Grant Program helps provide religious institutions and other nonprofits with the resources that will let them fulfill their missions safely and securely.”

This funding from the recently-enacted FY19 close-out supplemental budget adds $1 million to the Commonwealth Nonprofit Security Grant Program, which provides funding for security enhancements to nonprofit organizations that are at high risk of terrorist attack or hate crimes but are ineligible for similar federal grants. Governor Baker initially proposed the $1 million in funding in his supplemental budget proposal filed in September 2019. The program was previously budgeted at $500,000.

“No American, no matter whom they pray to or where they gather, should be concerned for their safety in a house of worship,” said Senate President Karen E. Spilka (D-Ashland). “While it saddens me that these additional security measures are necessary, I am heartened to know we are making these investments today to better prepare our non-profit intuitions and protect our residents. I hope to see the Commonwealth join together to fight back against the hate crimes, anti-religious acts and violent rhetoric that is spreading across the country. In the meantime, I’d like to thank my partners in the Administration and the House for helping to make this funding a reality.”

“There has been an alarming uptick in racial and religious violence across the country – much of it shamefully directed at Jews in the form of anti-Semitic attacks,” said House Speaker Robert A. DeLeo (D-Winthrop). “I was proud to work with my colleagues in the House, Senate President Spilka and Governor Baker to provide sadly-needed security funds. Massachusetts stands united against hatred.

“As acts of aggression and hate have touched so many of our communities in recent months, these grants have become absolutely vital,” said Senator Michael J. Rodrigues (D-Westport). “I am proud of the Legislature’s commitment to providing this vital funding and thank the Administration for doing what it can to ensure our places of worship and community centers that are at-risk to violent threats are safe and secure.”

“We congratulate Governor Baker, Senate President Spilka, Speaker DeLeo, and all of our legislative partners for recognizing and responding to the dire need for these vital security enhancements for the Jewish community and other targeted communities,” said Jeremy Burton, Executive Director, Jewish Community Relations Council. “The sobering reality is that violent antisemitism has come roaring back. We are gratified that our highest elected officials, the leaders of faith communities, and philanthropists who are leading the way in building the welfare of our civil society, are working to push antisemitism and other forms of hate back into the closets from which it has reemerged.”

The Commonwealth Nonprofit Safety Grant Program is overseen by the Executive Office of Public Safety and Security’s Office of Grants and Research and helps recipients acquire and install technology, equipment, and other resources to safeguard them from acts of violence. Funding is prioritized for applicants demonstrating the greatest need and cost-effective solutions to address their building safety and security.

“The modern public safety landscape means that we have to consider threats that once would have been unthinkable,” said Secretary of Public Safety and Security Thomas Turco. “The danger posed by extremists, terrorists and hate groups is one we have to be vigilant against even in the places we pray and come together with our neighbors.”

To apply for a 2020 Commonwealth Nonprofit Safety Grant, visit https://www.mass.gov/how-to/apply-for-a-commonwealth-nonprofit-security-grant.