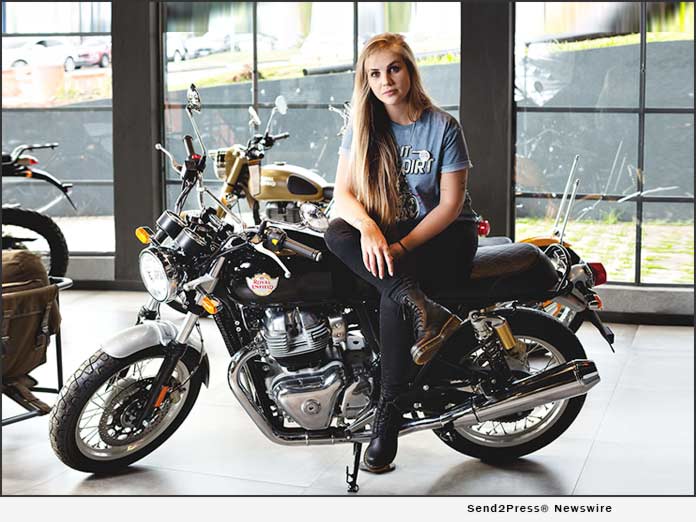 Her inclusion in the program is a major step for the female motorcycle community in Brazil since this is the first time a Brazilian woman, motorcycle enthusiast, and advocate, is invited to an event of such impact. She will race among men and women in the 749 Twin class.

Wladyka’s efforts to make motorcycling more accessible to Brazilian women are notorious. She is the founder of #ElasPilotam (translates to #SheRides), a movement that prioritizes sorority and empowers women, who already are involved in this universe, to take leadership roles in their bikes and lives. During FlatOutFriday, she will also be the only South American woman to take part in the races in Milwaukee.

In Milwaukee, Wisconsin, Bruna will race in place of professional pilot Melissa Paris, who, at the time, will be in Daytona, Florida. As the surprised from the invitation sets in, Bruna is wasting no time to get ready. Back in Curitiba (PR), Brazil, she is training with other eight pilots, from team FlatTrack BR.

“I’ve been involved with the Flat Track team in Brazil for years, but I’ve never really raced. The FlatOutFriday race will be my first big competition. To be standing alongside women who are so empowered in this segment is real pressure. I feel grateful for being able to represent Brazilian women, and I hope to do it with honors,” says Bruna. This is the second year the Brazilian group come to FlatOutFriday.

BREAKING BARRIERS: beyond the track

Bruna’s participation at FlatOutFriday is a significant milestone because it also shows the industry’s recognition of the women’s involvement in the Brazilian bike scene. By taking part in a program such as BTR’s, she increases awareness about all the opportunities for women in the two wheels universe, from being a rider to taking active roles in fabrication and market decisions.

The growth of #ElasPilotam movement in such a small period of time in Brazil is one of the proofs of how the female riding community needed an outlet to connect around the country. Besides the initiative, Bruna also fosters the motorcycling niche through events like the BMS Motorcycle, and the only Wall of Death show in Latin America.

Royal Enfield’s BTR Program highlights women and motorcycle culture in a format that brings riders from different backgrounds to race a custom flat track motorcycle – the base model for this program is Enfield’s Intercontinental 650 Twin. Besides Melissa and Bruna, the group also has photographer Lana McNaughton, founder of the Women’s Moto Exhibit, from Oregon, motorcycle enthusiast Jillian Deschenes, from Minnesota; and DIY shop owner Andrea Lothrop, from Canada.

This press release was issued on behalf of the news source, who is solely responsible for its accuracy, by Send2Press Newswire. To view the original story, visit: https://www.send2press.com/wire/first-female-brazilian-pilot-to-race-flatoutfriday/