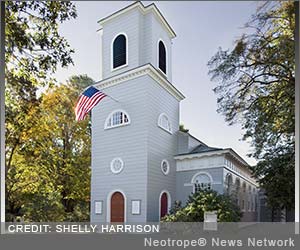 The landmark building, designed by renowned colonial architect Peter Harrison, has welcomed everyone from George and Martha Washington to Teddy Roosevelt and Reverend Martin Luther King, Jr. across its threshold. It was declared a National Historic Landmark in 1960.

The restoration project began in 2011. The building had become weathered over the years and had suffered through earlier patchwork repairs. Some of the original siding had shrunk and then expanded again, leaving gaps, and other sections were discovered to have been installed upside-down. Many of the original exterior boards were removed, stripped, painted, and re-attached. Old growth western red cedar was used where replacement boards were needed. Windows were also repaired. Broken modern plate glass, as well as broken 18th century glass panes, were replaced with 19th century salvaged restoration glass.

For Allen, a congregant at Christ Church, the restoration was particularly satisfying. "Christ Church has been a vital part of our community as a house of worship and a gathering space for centuries, and I'm one of countless Cambridge residents who have been welcomed under its roof," he says. "It was an honor to restore it to its prominence."

The annual Cambridge Preservation Awards have been presented by the Cambridge Historical Commission since 1997. According to the organization, "the program celebrates both outstanding historic preservation projects and notable individuals for their contributions to the conservation and protection of the city's architecture and history." This year's winning projects were recognized at a ceremony at Fariborz Maseeh Hall at M.I.T. on Thursday, May 30.

Copyright © 2013 MassachusettsNewswire™ and Neotrope®. Massachusetts Newswire is a publication of the Neotrope News Network and a TM of Neotrope.