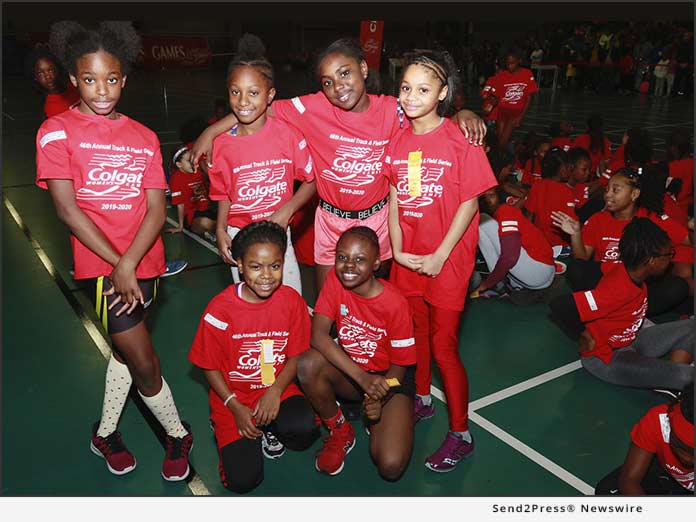 BROOKLYN, N.Y., Dec 16, 2019 (SEND2PRESS NEWSWIRE) — Dec. 14-16, 2019 — This weekend’s opening preliminary meet of the Colgate Women’s Games was the first event since the passing of its founder, Fred Thompson. Thompson’s contribution to the sport extended well beyond mentoring and coaching dozens of Olympians and world-class athletes; his self-proclaimed greatest accomplishment was the creation of what has become both an incubator for young athletic talent, and a venue that provides girls and young women a means to develop self-esteem and a sense of personal achievement. Thompson was inducted into the US Track and Field Hall of Fame on December 7, 2019.

Sandra Parick-Farmer one of countless women who trace their success in school, athletics, or their personal or professional lives back to Brooklyn at the Colgate Women’s Games was also inducted to the Hall of Fame.

The Games have produced an astounding 26 Olympians, hundreds of national champions, and just this October, a number of women who competed in the Games throughout grade-school won gold medals at the 2019 IAAF World Track and Field Championships in Doha, Qatar.

On Friday in the High School division, thousands came from all over the East Coast from as far as Boston to set a fast opening pace. Newcomer Maya Dorer, a tenth grader from Brooklyn’s St. Joseph High School, scored a double win with a personal best 2:16.72 in the 800 meters and ran 4:47.48 in the 1500 meters; returning Colgate Games’ finalist Dayahanna Douglas, also a sophomore from Brooklyn (Midwood High School), won the 55 meters in a personal best 7.16.

Peyton Rollins, a junior Olympic champion, long-time participant and returning finalist, is one of several girls who travel all the way from Boston. Peyton won the 55 meter-hurdles in 8:13. Jadah Fitzgerald of John Adams High school in Queens won the 200 meters in 26.04; Alina LaForest of St. Basil Academy, Jenkintown, PA won the 400 meters in 58.97; Selah Dungey of Newark Academy won the high jump, clearing the bar at 5’2″ and Denae Hill of West Orange High School, NJ won the shot put with a toss of 12.13M.

Meet Director Cheryl Toussaint said, “The Colgate Women’s Games have always been much more than a competition for athletic talent. Fred Thompson had a vision to provide a means for girls of any ability to challenge them to discover their own potential. The distance so many are willing to travel, and the incredible commitment of so many families, friends and coaches who encourage and support their girls and young women, are a testimony to the importance of his legacy.”

Saturday in the Mid School division, four-time Colgate Women’s Games’ record-holder Avery Lewis of Friends’ Central in Wynnewood, Pennsylvania, won the 55 meters in 7.03, and the 200 meters in 24.95. Ron-niah Wright, a returning finalist all the way from Stone Mountain, Georgia, won the 55 meter-hurdles in 8.35 and Kaela Swift of Brooklyn’s Success Academy won the 400 meters in 1:01:3. Last year’s Elementary B Finals champion Da’mira Allen of Northly Middle School in Aston, PA won the 800 meters in 2:25.49; Payton Drumwright of Carver Engineering and Science in Philadelphia, won the 1500 meters in 5:03.47; Alanna Woolfolk of Clayton Middle School in New Jersey cleared the high jump bar at 5’4″ for the win, and Shalisha Robertson of Betsy Ross Arts Magnet School in New Haven, Connecticut won the shot put with a 9.44M toss.

On Sunday, the Elementary B division featured returning finalists placing first in every event. Sophia Cope of Coles School, Scotch Plains, NJ won the 55 meters in 8.13. Alyssa Durant of Happy Hollow Middle School in Boston, MA won the 55 meter-hurdles in 11.59, and the High Jump bar clearing 4’2″ a personal record; Sydney Chadwick of St. Mathew School in Edison, NJ won the 400 meters in 1:07.74, also a personal record; Rhia Randolph of Philp’s Academy in Newark, NJ won the 200 meters in 29.05; Paige Sheppard of St. Bartholomew Academy in Scotch Plains, NJ, won the 800 in 2:33.23.

Also Sunday, the Elementary A division featured newcomers from as far as Massachusetts, and 30’s Plus competitors featured nationally ranked athletes, several of who have competed since elementary school.

Participation in the Colgate Women’s Games is completely free. Girls and young women compete within their own grade divisions for ribbons, medals and points.

Four preliminary meets and a semi-finals at Pratt Institute will determine who will compete at the finals at the New Balance Track and Field Center at The Armory, New York Saturday, February 1, 20 where trophies and educational grants-in-aid from Colgate-Palmolive Company are awarded to top place finishers in each grade division.

Promising young track stars, parents, coaches and recruiters can find information about the program and follow results at https://www.colgategames.com/results.

[2] https://www.Send2Press.com/300dpi/19-1216s2p-cwg-Elementary-A-comps-300dpi.jpg
CAPTION: Elementary A competitors at the opening preliminary meet of the nation’s largest track and field series for women, the Colgate Women’s Games, on Sunday in Brooklyn, NY.

This press release was issued on behalf of the news source, who is solely responsible for its accuracy, by Send2Press Newswire. To view the original story, visit: https://www.send2press.com/wire/the-nations-largest-track-series-for-girls-produces-world-class-athletes-and-exceptional-young-women/

The Magic City: The Black Women Behind The World Games 2022 in Birmingham, AL