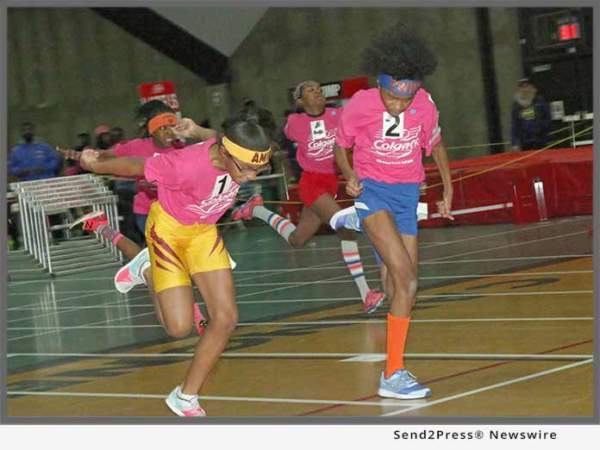 BROOKLYN, N.Y., Jan 02, 2018 (SEND2PRESS NEWSWIRE) — Rising young stars and returning champions from all over the East Coast shared the spotlight throughout this holiday weekend at the second preliminary meets of the nation’s largest women’s amateur track and field series, the Colgate Women’s Games. Extreme cold temps had little effect on top contenders, some who come from as far as New Hampshire, Massachusetts, Virginia and Georgia, as they continue to improve an already fast national pace.

Friday in the High School division, Manhattan sprinter Brianna White of Leman High School stepped up a notch with an impressive double win in the 55M (7.24) and the 200m (25.89). Her 55M race was her first victory in two seasons over reigning champion Iantha Wright of Jamaica, Queens, and her 200M win earns White her fourteenth first place sprint victory in major meets throughout 2017.

Brooklyn’s Daniella Griffith of Medgar Evers Prep won the 400 Meters in 1:00.16; Athing Mu of Trenton High School in New Jersey scored her second consecutive double win with improved times in both distance events, crossing the tape first in the 800M (2:18.81) and 1500M (4:53.82). In the High Jump, with event champion My’Khiyah Williams out this week, Phoebe Myers of Young Women’s Leadership School cleared the bar at 5’2″ for the win; and Manhattan’s Mariam Cisse won the Shot Put with a toss of 10.78M.

In the Mid School Division on Saturday, 12 yr-old Avery Lewis of Westtown School in West Chester, PA remains one of the fastest young sprinters in the nation, scoring another double win in the 55M (7.19) and 200M (25.15). The four-time Colgate Women’s Games sprint record-holder’s performance in the 200M was another personal record for Lewis. Having won the 55M at the first preliminary meet in another personal best (7.16), officials said her times are likely among the fastest in the nation for a twelve year-old this year.

Meet Director Cheryl Toussaint said, “Avery continues to bring her A game each season, and her participation has created an especially high level of excitement ever since she began competing in our Elementary A division. She’s also an excellent student as well as a phenomenal athlete.”

Toussaint adds that the Colgate Women’s Games strive to retain a welcoming atmosphere for athletes of all abilities. “Our goal is to help girls of all ages build self-esteem through friendly competition, encouraging them to discover and then challenge their own limits,” she said.

Toussaint said the Colgate Women’s Games have become a proving ground, drawing top athletic talent and have produced hundreds of national champions, and with last summer’s six alumnae Olympic Team USA, 26 former Olympians. More importantly, she adds they continue to have a positive effect on countless lives over more than four decades.

“The number of participants and the size of the crowds made up of families and friends, some who travel great distances is evidence the Colgate Women’s Games continue to be such an important event, and we are so pleased that thousands of participants and their families chose to celebrate their New Year’s weekend with us in Brooklyn this weekend.”

In the Mid School Division on Saturday, Peyton Rollins of Andrews Middle School was among those who travelled the furthest to compete, all the way from Massachusetts to win the 55MH in 8.31. Rollins, who placed second overall at last year’s Colgate Women’s Games, had more than a dozen first place wins in hurdles races at major regional meets throughout 2017.

Simone Kelly of Wissahickon Middle School in Ambler, PA won the the 400M in 59.61; Last year’s first place finalist Alina LaForest of Drexel Neumann Academy, Chester, PA won the 800M in 2:21.10; Brooklyn’s Rainn Sheppard of MS 313 won the 1500M in 4:53.70; and Rowan Houston of Rye Country Day School cleared the High Jump bar at 5’2″ for her second win and personal best jump. Melissa Aymil of Mendham Middle School in Brookside, NJ retains her lead in the shot put with a personal best toss of 10.65M.

Damira Allen of Chester School of the Arts, Chester PA, last year’s Colgate Women’s Games’ Division A 800M finals champion and Special Awards winner for “Outstanding Competitor….”, now leads Division B after winning the 800M at Prelim 1 in 2:26.68 and Prelim 2 in 2:27.52. Both personal best times for the 10 year-old, multiple Gold-medal Junior Olympic champion. Allen has an astonishing record of more than 40 first place middle and distance race wins at major regional and national mets in her age division since 2015.

Additional results for College/Open and Elementary A and 30’s Plus division events are available at colgategames.com/results.

Participation in the Colgate Women’s Games is completely free. Girls and young women compete within their own age/grade divisions for ribbons, medals and points. Events include 55 meters, 55-meter hurdles, 200 meters, 400 Meters, 800 meters, 1500 meters, high jump and shot put. Top point scorers advance to the Finals where they compete for trophies and educational grants-in-aid from Colgate-Palmolive Company.

Four preliminary meets and a semi-finals at Pratt Institute determine who will compete at the finals at the New Balance Track and Field Center at The Armory, New York Saturday, February 10, 2018, where trophies and educational grants-in-aid from Colgate-Palmolive Company are awarded to top place finishers in each grade division. Hopeful young track stars, parents and coaches can find information about the program at http://www.colgategames.com/.

*Photo Caption: Philadelphia’s Amirah Nesmith and Brooklyn’s Kaela Swift sprint to a tie in the Elementary B division 55 Meters at the second preliminary meet of the 44th Annual Colgate Women’s Games in Brooklyn, NY on Sunday.

This press release was issued on behalf of the news source, who is solely responsible for its accuracy, by Send2Press Newswire. To view the original story, visit: https://www.send2press.com/wire/east-coast-track-stars-heat-up-cold-new-years-eve-second-prelim-of-the-44th-annual-colgate-womens-games/