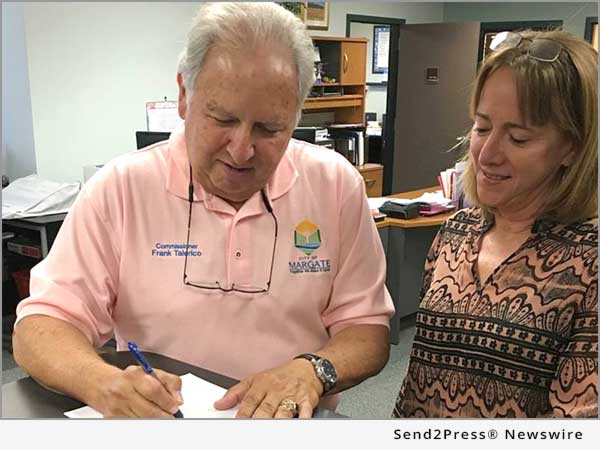 MARGATE, Fla., Jul 18, 2016 (SEND2PRESS NEWSWIRE) — On July 12, 2016, the Margate Community Redevelopment Agency (MCRA) approved an agreement with South Florida’s New Urban Communities for development of a 36-acre mixed use town center at State Road 7 and Margate Boulevard. The plan will provide 968 apartment units, 100,000 sq. ft. of retail and restaurants, an 80+ room hotel, and numerous civic uses–all within walking distance of each other.

“We are pleased to partner with the Margate CRA to create a pedestrian friendly new city center,” states Timothy L. Hernandez, AICP, Principal of New Urban Communities. “The Margate City Center will be a beautiful and interesting place that Margate residents can be proud of, with lots to see and do. It will be a place that attracts new businesses and residents to Margate, and serve as a catalyst for additional redevelopment.”

New Urban Communities is one of South Florida’s most successful developers of urban infill and redevelopment projects, with projects ranging from less than one acre to 145 acres in size, including many mixed use communities. For this project they’ve engaged award-winning architects Dover-Kohl & Partners to design a sustainable community with a mix of uses and building types, an interconnected network of walkable streets, and architecture that will reinforce a distinctive sense of place.

“The Margate City Center will have the look and feel of a true downtown, something unique to suburban Broward County,” said MCRA Executive Director Diane Colonna. It provides a traditional “grid” pattern of streets and sidewalks that promotes connectivity and pedestrian activity. At two and three stories in height, the buildings will have a “human” scale. Plans have also been discussed with Broward County Metropolitan Organization (MPO) for modifications to enhance State Road 7 in the project area with pedestrian/bicycle safety measures, as well as landscape beautification.

The CRA will receive $10,041,750 as payment for the property, and a 1% contingent fee that is estimated at between $1 million and $1.4 million depending upon final construction costs. These revenues will be received over the three phases of the project’s construction. The MCRA is funding the majority of the public/civic components which will include a state of the art community center, waterfront promenade, amphitheater and civic green, canoe/kayak launch and shared parking garage. Based upon the estimated development costs, the residential and commercial components of the project are expected to have a market value (after completion of all phases) of nearly $150 million, and will support approximately 400 permanent jobs with an estimated annual payroll of $23 million.

MCRA Chair Frank Talerico noted “This is such an exciting day for the City of Margate. We’ve got an excellent development partner in place and a beautiful project to build. I can’t wait to get started!”

This press release was issued on behalf of the news source, who is solely responsible for its accuracy, by Send2Press Newswire. To view the original story, visit: https://www.send2press.com/wire/margate-cra-approves-development-agreement-with-new-urban-communities-for-36-acre-city-center-project-20160718-04/