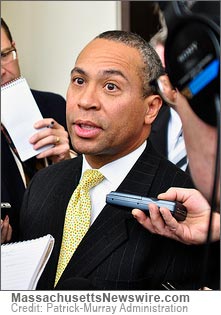 “I am pleased to nominate these accomplished attorneys as District Court clerk-magistrates,” said Governor Patrick. “They both have valuable legal and management experience that will enable them to excel in these important positions. I thank them for their commitment to the fair administration of justice in the Commonwealth.”

Donald P. Hart has an extensive professional background in both business and law. From 1985 to 1999, he held a variety of management positions in the private sector. After graduating from law school in 1999, Hart worked as a law firm sales representative, an Assistant District Attorney in the Plymouth County District Attorney’s Office and a corporate contracts manager at Boston Scientific Corporation. Since 2004, he has maintained his own private general litigation practice in Weymouth and Holbrook, where he handles both criminal and civil matters.

In 2011, Hart founded the Hart Speech Foundation, a charitable organization that provides scholarships and resources to members of the stuttering community. He is a graduate of Lesley College (B.A., 1995) and New England School of Law (J.D., 1999). Hart currently resides in Abington and intends to relocate to Nantucket if confirmed to this position. He is slated to fill the vacancy at the Nantucket District Court created by the retirement of The Honorable Roxana E. Viera.

Stephen C. Poitrast has many years of experience as a court administrator and a lawyer. He has been the Acting Clerk-Magistrate at the Waltham District Court since 2011. He began his legal career in 1986 in the Massachusetts Attorney General’s Office, as an Assistant Attorney General in the Consumer Protection Division and as Chief of the Consumer Complaint Section, where he was responsible for training and supervising 15 employees and 25 volunteer mediators. From 1991 to 1999, Poitrast maintained a sole practice with a focus on criminal law.

The Immigration Law Office of Los Angeles, P.C. has achieved a landmark victory for a client unfairly refused permanent residency