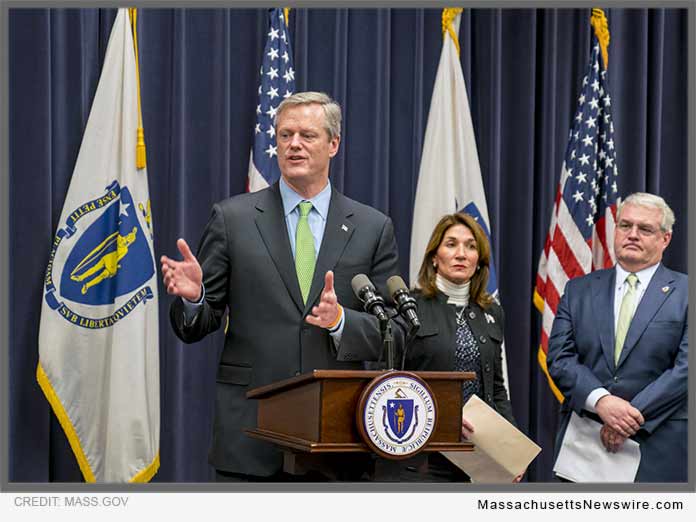 “This fiscally responsible budget continues to support every community in the Commonwealth—without raising taxes on the people of Massachusetts,” said Governor Charlie Baker.  “Through tax credits, new programs and increased investments, our proposal will support working families as well as small businesses and enhance programs to make college more affordable, fight the opioid epidemic and get workers the skills they need to compete for better jobs.  We look forward to working with the Legislature in the coming months to pass a sustainable and balanced state budget.”

“The local aid and Community Compact investments in our budget proposal reaffirm our commitment to serving as a reliable partner to cities and towns across the Commonwealth,” said Lieutenant Governor Karyn Polito. “Our proposal will also fund a new State Police class, important public safety grants for municipalities, as well as youth and domestic violence prevention programs, further strengthening safety in our cities and towns.”

The FY19 budget proposal, known as House 2, relies on a consensus revenue tax estimate of $27.594 billion, which is 3.5% growth over the revised FY18 tax revenue projection. House 2 increases overall spending by 2.6% and keeps MassHealth growth to 0.5% over FY18 estimated spending.

House 2 relies on less than $100 million in non-recurring revenue, and anticipates a deposit of $96 million into the Stabilization Fund, which would bring total reserves to $1.463 billion, an increase of 30% since the Baker-Polito administration took office.

The fiscally responsible plan makes investments across key areas without raising taxes or fees to balance the budget.

The administration proposes to cut the filing fee for forming a limited liability company (LLC) in Massachusetts in half to $250. The Commonwealth’s LLC filing fee is one of the highest in the country.

House 2 also supports the new veteran tax credit for smaller businesses, which was first proposed by the Baker-Polito administration and enacted by the Legislature in FY18. Businesses with 100 or fewer employees are eligible for a two-year $2,000 annual tax credit when they hire and retain an unemployed veteran.

House 2 includes $4.865 billion in local education aid, an all-time high. FY19 funding includes $15 million for schools districts that have experienced significant levels of enrollment of students from Puerto Rico and the U.S. Virgin Islands that were displaced by Hurricanes Maria and Irma. The budget also proposes $24.3 million in Chapter 70 aid for districts as a down payment on the rising cost of healthcare, which was the biggest recommendation from the Foundation Budget Review Commission.

The administration’s proposal includes over $100 million in scholarship assistance for students pursuing post-secondary education at campuses across the Commonwealth, including $7.1 million to double the MassGrant program for community college students. This new MassGrant funding is the largest increase in scholarship assistance in over a decade and will help close any remaining gap in financial aid for tuition and fees for all full and part-time students at the Commonwealth’s 15 community colleges.

House 2 also proposes $3 million in new support for an early college program that will focus on engaging student populations who are currently underrepresented in college and encouraging students to enter STEM fields.

House 2 recommends an increase of $93.2 million for the Department of Mental Health (DMH), which includes a significant investment in funding for DMH’s Adult Community Clinical Services, DMH’s redesigned community-based service model for adults with serious mental illness. The new model will integrate behavioral and physical health to provide active and assertive outreach and engagement, continuous clinical coverage, and include peer and recovery coaches as part of the treatment plan.

To strengthen overall treatment and aftercare services provided to civilly committed individuals, the administration recommends $12.8 million, including a $3 million increase, for the Massachusetts Alcohol and Substance Abuse Center (MASAC) in Plymouth. This new funding will support the hiring of new substance abuse counselors and implementation of a new Medication Assisted Treatment Reentry Initiative tailored to meet the needs of the civilly committed population at MASAC.

Since taking office, the administration has led reforms at the Department of Children and Families (DCF) and has increased funding by $132.8 million to support the hiring of approximately 600 new employees to address the critical infrastructure needed to run the agency, including over 300 social workers. House 2 recommends nearly $1 billion for DCF, a $20 million increase over FY18 spending, which will support the continued hiring of new staff dedicated to serving the Commonwealth’s most vulnerable children.

The administration recently announced the Housing Choice initiative to encourage municipalities to plan for and build the diverse housing stock the Commonwealth needs to address affordable housing challenges. House 2 has nearly $3 million in new funding to provide this program incentives, grant funding, and technical assistance.

To bring the Commonwealth in line with other states and private sector employers, the Baker-Polito administration proposes to cap accrued sick time for executive branch and higher education employees to 1,000 hours.

In order to level the playing field between hotels, motels, and transient accommodations, the Baker-Polito administration proposes to require operators who rent rooms for 150 or more days per year to collect and remit room occupancy tax. The proposal also permits the Commissioner of the Department of Revenue (DOR) to enter into voluntary agreements with intermediaries who facilitate short-term rentals for the collection of room occupancy tax.

Substance Misuse and the Opioid Epidemic