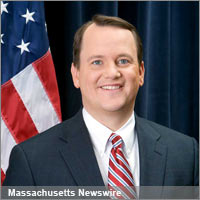 FORT DEVENS, Mass. /Massachusetts Newswire/ — Lieutenant Governor Timothy Murray today toured the U.S. Army’s new Base Camp Systems Integration Laboratory (SIL) at Fort Devens as part of his tour of military bases across the Commonwealth to build grassroots support to protect the missions, jobs and economic investments associated with the bases. Lieutenant Governor Murray was joined on the tour by U.S. Congresswoman Niki Tsongas, local, state and federal officials as well as leadership from the Massachusetts National Guard.

The U.S. Army opened the Program Manager Force Sustainment Systems, a base camp integration lab, at Fort Devens last year. Later this week, the base camp will welcome a military training unit. Service members training at Fort Devens will stay in the SIL, providing benefits for researchers from Natick Soldier Systems Center and active military servicemen and women.

“Through proactive planning, Massachusetts has and will continue to position the state to protect our military bases,” said Lieutenant Governor Murray. “Fort Devens is the training area of choice for the region with opportunities to build on existing synergies such as the research development at the Natick Soldier Systems Center. By touring Fort Devens and all of the state’s bases, the Task Force is able to gather more information to help promote the work of the missions and operations that protect our Commonwealth and national security. Our Administration will work tirelessly with our congressional delegation and partners across the state to promote Fort Devens’ training facilities, and continue our focus to keep Massachusetts’ military bases open and their missions intact.”

Following the tour, Lieutenant Governor Murray chaired a meeting of the Military Asset and Security Strategy Task Force, which included a roundtable discussion at MassDevelopment. Today’s visit and roundtable discussion is the Lieutenant Governor’s sixth visit to the state’s military bases. In addition to Fort Devens, Lieutenant Governor Murray has toured Barnes Air National Guard Base in Westfield, Hanscom Air Force Base, Westover Air Reserve Base in Chicopee, the Massachusetts Military Reservation on Cape Cod and Natick Soldier Systems Center in Natick.

“Having spent time serving at Fort Devens at various points in my 32 year Army National Guard career, I can personally say it is a small installation that delivers a huge punch,” said U.S. Senator Scott Brown. “For over eighty years, active, Guard and reserve service members from all branches of the military have leveraged the post’s world-class training areas and facilities in order to prepare for missions around the globe. Fort Devens, and the men and women assigned there, have proven time and again that they are a unique, and indispensable national security asset.”

“Despite having undergone significant changes in the last two decades, Fort Devens continues to provide support to over 40,000 soldiers, cadets, and other personnel while training hundreds of Massachusetts Guardsmen and Reservists each year in specialized capabilities,” said U.S. Congresswoman Tsongas. “Additionally, Fort Devens is now working in partnership with Natick Solider Systems to make Army base camps more energy efficient and mobile, a development will provide greater security for our troops while saving money at the Department of Defense. I will continue to work with my colleagues in the Massachusetts delegation and the Military Asset and Security Strategy Task Force to highlight the importance of Fort Devens and our other military facilities in the Commonwealth.”

On February 27, 2012, Lieutenant Governor Murray signed an executive order establishing the Commonwealth’s Military Asset and Security Strategy Task Force. The Task Force, which is chaired by Lieutenant Governor Murray, engages state agencies to work directly with stakeholders to develop and implement actions that will support military bases across the Commonwealth. Today’s visit to Fort Devens is just one example of the work the Task Force is leading.

The executive order builds on the work Lieutenant Governor Murray has led over the last year, including a series of strategy meetings with Administration cabinet secretaries and private sector groups such as the Massachusetts Defense Technology Initiative to gather current data and perspectives about each military base so Massachusetts can better position, promote and protect assets for each base. The Task Force will work towards completing a comprehensive strategic plan in the coming months.

In addition to engaging local and regional support to help promote and protect the state’s military bases, the Task Force will develop, coordinate and implement actions in the areas of workforce training, infrastructure improvements, environmental and utility savings, housing and transportation to support the missions at military bases across the Commonwealth. Additionally, the Task Force will identify steps the state can take to remedy problem areas before preliminary recommendations from the federal government are adopted and missions are implemented. Lieutenant Governor Murray and members of the Task Force will advise the Governor, as well as other executive and legislative officials, regarding the ongoing efforts by the U.S. Department of Defense to close, realign, restructure, streamline, or in any way impact military bases in Massachusetts.

“Our military bases are part of the fabric of the Commonwealth and we’re looking for new ways to maintain and enhance these facilities with investments in areas such as energy efficiency or clean energy, which create local jobs and upgrade existing infrastructure,” said Secretary of Energy and Environmental Affairs Richard K. Sullivan Jr.

In January, the U.S. Department of Defense announced a plan to reduce federal defense spending by approximately $500 billion over the next decade as a result of federal deficit reduction negotiations. The Department of Defense explained that cuts would be achieved in part by reducing total force numbers and relying on technological advances to build a more streamlined military. The Pentagon also requested that Congress authorize a Base Realignment and Closure Commission (BRAC) to recommend the closure or consolidation of select military bases across the country.

“The 495/MetroWest region is proud to host two defense installations with strong synergies – Natick Soldier Research Development & Engineering Center and Fort Devens,” said Paul Matthews, Executive Director of the 495 Partnership. “These installations are vitally important in bringing together Massachusetts’ employers and academia to develop state-of-the-art technologies to assist our fighting men and women, since Natick is the home to extensive product development, and Devens hosts a Base Camp Integration Lab that’s crucial to the testing of these technologies. The Lieutenant Governor’s leadership and the work of the state’s Military Asset and Security Strategy Task Force is pivotal in calling attention to this unheralded work, which not only benefits our soldiers abroad, but also provides direct economic impact right here in Massachusetts.”

“Based on Devens and housed in the former Fort Devens Officers Club, the Nashoba Valley Chamber recognizes the importance the military has in the Commonwealth,” said Melissa Fetterhoff, Executive Director of the Nashoba Valley Chamber of Commerce (NVCoC). “NVCoC appreciates the Lieutenant Governor’s efforts to bring businesses, government and the community together to increase awareness and protect the missions, jobs and economic investments associated with the bases of the Commonwealth.”

During today’s visit, Lieutenant Governor Murray also highlighted recent initiatives in support of the state’s veterans and defense industry. The Patrick-Murray Administration’s Fiscal Year 2013 budget proposal includes $11.25 million in increased funding for vital veterans’ services, including workforce training. The defense industry and its workforce is also a major part of Massachusetts’ economy with thousands of employees working at the state’s military bases and more than $14 billion in defense contracts awarded to Massachusetts firms in 2010.

“Some states export raw materials, other states export finished goods,” said Representative Cory Atkins. “Here in Massachusetts, we export brainpower. Our military bases and defense contractors provide thousands of knowledge-intensive, high-paying jobs, and so we need to do everything we can to keep those jobs here.”

“Fort Devens is a vital part of our local and state economy,” said Representative Jennifer Benson. “Maintaining this military base helps our entire region thrive and I thank the Lieutenant Governor for his work in protecting and promoting Fort Devens.”

“Massachusetts has a strong history of supporting our military and our military bases,” said Representative James Vallee. “As a Lieutenant Colonel in the Army National Guard I have had the opportunity to train at Fort Devens and value the facilities it has. These facilities sharpen the skills of our soldiers/airmen and marines and prepare them for deployments overseas. It is imperative we do all we are able to retain all the military bases here in Massachusetts. Governor Patrick and Lieutenant Governor Murray are strong proponents for the bases and the military remaining here in Massachusetts.”

Since 2007, Lieutenant Governor Murray has led the Governor’s Advisory Council on Veterans’ Services and today’s tour builds on the Administration’s commitment to the Massachusetts veterans’ community, our regional economies and the state’s defense industry. To learn more about the Patrick-Murray Administration’s commitment to Massachusetts veterans, visit: www.mass.gov/veterans. To learn about the work of the Military Asset and Security Strategy Task Force visit: http://www.mass.gov/governor/administration/ltgov/lgcommittee/military/.