BOSTON /Massachusetts Newswire/ — Tenth graders made across-the-board gains on last year’s MCAS exam, and 83 percent of students have already met the state’s minimum testing requirements needed to earn a high school diploma, according to 2009 results released by the Patrick-Murray Administration at a Statehouse ceremony attended by Lieutenant Governor Murray and state education officials on Wednesday. 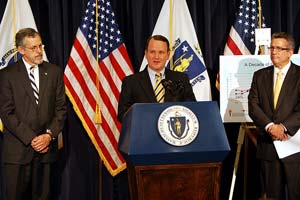 The announcement marks the earliest that MCAS results have been publicly released since the beginning of the state’s testing program in 1998. The timely release provides important information to the public and sets the stage for the later release of district and school results.

The grade 10 gains were propelled by improved performance from all student groups including African American, Asian, Hispanic/Latino and white students, students with disabilities, limited English proficient students, and low income students. Results show that all student groups showed an increase in the percent scoring Proficient or higher on the English Language Arts (ELA) and Math exams, and almost all showed improvement on the Science and Technology/Engineering exam (STE).

“The Governor and I congratulate the students and their teachers on this great accomplishment,” said Lieutenant Governor Tim Murray. “We remain committed to promoting high standards and expectations for all students and are pleased to see this continued progress.”

Statewide 2009 MCAS results in English Language Arts (ELA) showed promising gains by students in most grades and all subgroups, a significant change from the past several years of flat or declining results in elementary and middle school performance. Gains made by African American and Hispanic/Latino students mirrored improvement statewide, leaving a smaller – but still evident gap in performance in some grades than has been seen in previous years.

Lieutenant Governor Murray noted that the Commonwealth, under the leadership of Governor Patrick, has continued to show improvement annually on the state’s MCAS exams, and its students have outperformed many of their peers nationally and internationally on measures including the National Assessment of Educational Progress, the SAT, and the Trends in Mathematics and Science Survey.

“These results demonstrate that high standards coupled with high support yields strong achievement,” he said. “Our teachers and students are demonstrating that they are capable of responding to high expectations.”

“I am very encouraged by the steady improvement on the grade 10 exams,” he said. “These results demonstrate that our teachers are helping more students reach academic proficiency. Our focus must continue to be on ensuring that every student is fully prepared to achieve.”

Secretary Reville noted that the Governor recently filed legislation to ensure all students are fully prepared for success in college and beyond by providing teachers and school districts with the opportunity to more rapidly turn around underperforming schools while promoting innovative educational practices to ensure that all students reach academic proficiency.

“The level of progress we have seen at grade 10 over the years is very encouraging, but we have an urgent need to identify and support those students entering their senior year of high school who have yet to meet the state’s graduation requirement,” said Chester. “We are working closely with school leaders to ensure that those students have access to adequate resources and interventions prior to the next testing opportunity.”

Middle school mathematics, despite some gains since last year, remains an area of concern for state education officials. At grades 7 and 8, fewer than half of all students statewide scored Proficient or higher in Math in 2009. As one strategy to ensure that teachers are well-prepared to instruct students in mathematics, the state Board of Elementary and Secondary Education has now implemented a new mathematics assessment requirement for educator licensure for elementary teachers and teachers of students with disabilities.

Other statewide results include:

•Statewide, students made one- to five-point gains in the percent scoring Proficient and higher in ELA in all grades except grade 6, one- to three-points gains in Math at grades 5, 6, 7, and 10, and a four-point gain in STE at high school.

The Massachusetts Comprehensive Assessment System exam has been administered annually as a key part of the state’s Education Reform efforts since 1998. Students in the class of 2003 were the first required to pass the ELA and math exams to earn a high school diploma.

District and school results from the 2009 MCAS are still being compiled and will be released publicly later this month. For more information on the MCAS exam or to view the full statewide report, look online at www.doe.mass.edu/mcas/.