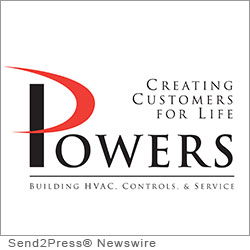 Alan Hope, the President and CEO of Powers of Arkansas, was invited in May to present at the Solutions Partner Council 2012 conference in Zug, Switzerland which consisted of over 50 partners from 24 countries. The theme of the conference was “Energy Efficiency with Building Automation and Controls.” His presentation, “Creating Customers for Life,” was an overview of his company history and the business strategy that Powers originated for promoting customer retention and business development. Mr. Hope was the only Solutions Partner to present at the international conference.

“I am extremely proud of my team at Powers for earning this international distinction for two years in a row. It shows the level of dedication and knowledge that we bring to our business. I was also pleased to be asked to represent the North American Solution Partners at this conference and share our business philosophy with my colleagues from around the world,” says Alan Hope, President and CEO of Powers of Arkansas.

“It was also very informative to meet with other partners from around the world and to learn how their companies and their countries view energy efficiency. I found that many of these countries are more aware and more active in utilizing technology for energy savings than I find in the U.S.”

Powers of Arkansas has 130 employees around the state that serve customers ranging from over 35 hospitals including the University of Arkansas for Medical Sciences and over 75 State and Commercial customers including the Arkansas Department of Environmental Quality and over 30 Higher Education campuses.

News Source: Powers of Arkansas :: This press release was issued on behalf of the news source by Send2Press® Newswire, a service of Neotrope®. View all current news at the Send2Press for Journalists Portal: http://Send2PressNewswire.com .