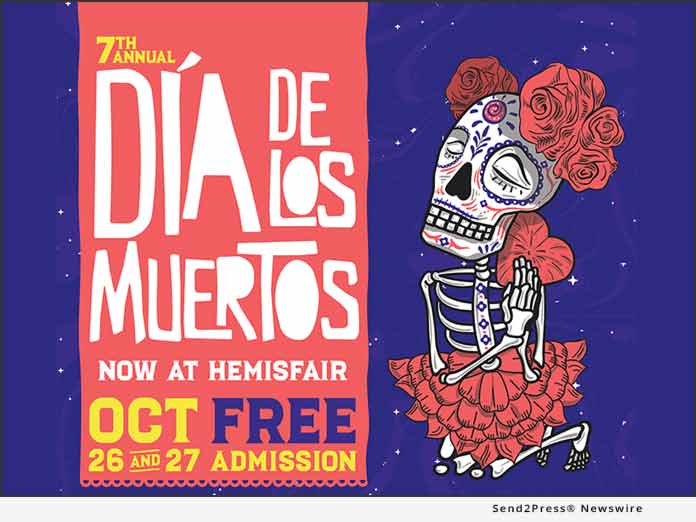 One of the most significant traditions during the Day of the Dead is the creation of an altar to honor the lives of the deceased. This important cultural practice in Mexico and Mexican-American and Latino communities is a reflective celebration of life in which the living, lovingly pay tribute and remember their departed family members and friends.

“The altar exhibition is truly the heart of the event with attendees viewing and experiencing 50 distinctive altars and a community living altar. These are the stories of San Antonio and its people told in powerful expressions of art and soul,” says Jim Mendiola, Artistic Director.

A major focal point of the Día de los Muertos festival is the large community living altar which be featured at the entrance to the event. For the past several weeks people have been sending in photos via the Día de los Muertos website of their recently departed loved ones. The photos submitted, numbering in the hundreds, will be wheat pasted onto the living altar by local artist Sarah Brooke Lyons to create this powerful altar. During the two-day event attendees can add to the altar by leaving small offerings or photos.

This project is a collaboration between Artpace and New York based artist Mariana Vasquez and San Antonio artist Martin Delgado Event organizers have collected hundreds of photos for inclusion in the living altar via online submission at http://muertosfest.com/.

Onsite artwork highlights include:
* An expanded visual artwork installation by the creative artist team Momo & Pompa, designed specifically for the new Hemisfair venue. The light sculptures of Momo and Pompa have been a part of the festival since its inception. The artist couple are prolific in their production of exhibitions and massive public light sculptures which supports their mission to inspire and help promote heritage by creating multi-sensory contemporary artwork with partnerships for the public and children of all ages.
* Soldado and Adelita Sculptures were created through collaboration between students and alumni of local arts group SAY Sí and artist group Colectivo Ultima Hora from Mexico City, MX. During a summer residency at SAY Sí in 2017, the two arts groups brought oversized calacas to life to exemplify the iconic images of ancestors from Mexico to San Antonio who were affected by or fought in the Mexican Revolution. To learn more about these organizations, visit http://saysi.org/ or http://colectivoultimahora.org/ for more information.

Not to be missed is the curated art market with over 60 local vendor’s selling original Day of the Dead inspired crafts and artwork. Event organizers are proud to support these 60 local businesses and entrepreneurs who represent San Antonio’s creative economy. Vendor businesses attribute their participation in the Día de los Muertos event with helping grow their companies.

“Día de los Muertos (Muertos Fest) has become my absolute favorite event of the year and has been the foundation of my confidence in San Antonio artist markets. I never expected my work to be so well received. What Muertos Fest has done is give equal importance to local, small businesses and it is absolutely the highlight of our year, every single year,” says Cristina Martinez of @VeryThat.

The two-day event also includes an impressive entertainment lineup for three event stages, workshops and children’s programming. The Dance, Drum and Puppet Processions will take place on Saturday, October 26, at 7 p.m. and Sunday, October 27, at 3 p.m.

This press release was issued on behalf of the news source, who is solely responsible for its accuracy, by Send2Press Newswire. To view the original story, visit: https://www.send2press.com/wire/7th-annual-dia-de-los-muertos-event-to-exhibit-50-altars-showcase-local-artists/

La Posada 2021: Holiday Celebration at the Church of Scientology Honoring the Diversity of Los Angeles