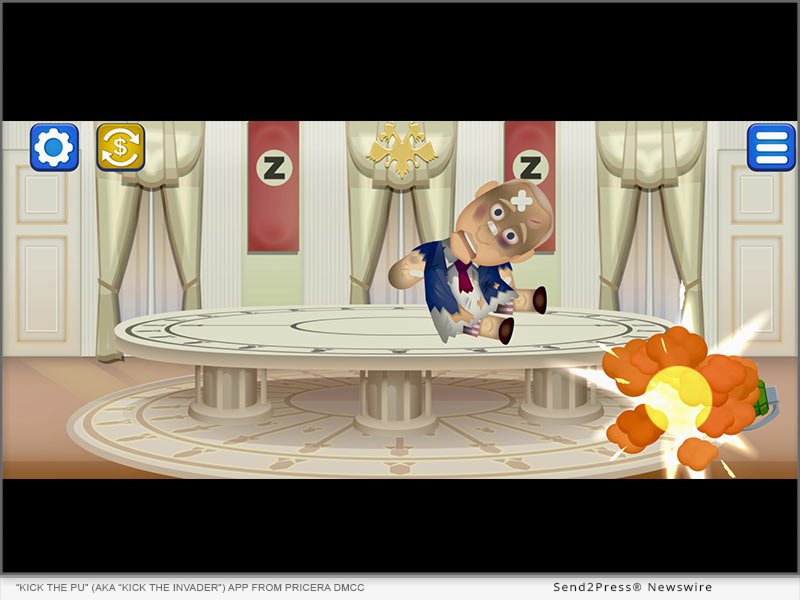 The game app has been under constant attack by the Russian Federal Security Service bot farms, and its developers have been getting numerous threats and curses

NEW YORK, N.Y. /Massachusetts Newswire – National News/ — “Kick the Pu” (aka “Kick the Invader”), a brand-new stress relieving adventure game, is now available in mobile application stores from PRICERA DMCC. Players could make good use of the game, as it may help them blow off steam and release their negative emotions in a playful manner by beating up, firing a Javelin, or throwing a hand grenade at one of the world’s biggest anti-heroes and invaders.

In the release version of the game players are given the opportunity to mock and torment Putin, Lukashenko, a so-called “chmonya” (that’s what they call a Russian soldier), or a “Kadyrovite” (called the soldiers of Ramzan Kadyrov).

A number of Russian propagandists will soon appear in the game as well. Players are offered a selection of weapons: a knife, a machine pistol, a hand grenade, or a grenade launcher. The game is now available on the App Store and Google Play in any country of the world except for Russia and Belarus.

“Kick the Pu” also supports a good cause – by playing it, you are helping Ukrainian defenders. Most of the ad revenue from the free version of the game will be used to support the Armed Forces of Ukraine. The premium version costs 99 cents, all of which will be spent on wounded defenders’ medical treatment. The funds transfer reports will be published in the game developers’ Telegram channel.

The game was developed by a team of Ukrainian IT professionals and Belarusian programmers who had been persecuted over their support of the opposition and forced to flee Belarus.

“Back in March 2022, we got this idea of creating a simple anti-stress game where every Ukrainian could mock and abuse Putin. In a matter of a few days, we put together a team of developers, artists, and animators – Belorussians and Ukrainians who were prepared to work on this social project free of charge,” says one of the developers, Vlad Sen. “The first version of the game was ready in just three weeks, in April. That is when the lengthy and complicated process of publishing our app on the App Store and Google Play began. Our submissions were repeatedly rejected despite numerous appeals – we had to submit more than 15 of those.”

In anticipation of cyberattacks and bot invasions by the Russian FSB, the developers of “Kick the Pu” are urging all mobile device users who would like to play the game to download it as soon as possible, or else it may be too late because of the bot attacks. If you download the game now, you will be able to play it even when it disappears from the app stores.

The game developers are also encouraging players to give the game high ratings, leave comments with ideas of how the game could be improved, and share the app with their friends. All of that would help to beat the negative comments and complaints left by ruscists so that more people can have access to such a fun way of dealing with stress.

The game can be downloaded from the Google Play and App Store.

Anyone who would like to take part in the creation of new versions of “Kick the Pu” is welcome to do so by suggesting new types of weapons, new anti-heroes or ways of mocking them. The incoming suggestions include some public figures whom Ukrainians “admire” the most: Vladimir Solovyov, Olga Skabeyeva, Margarita Simonyan, Dmitry Medvedev, Anton Krasovsky, Sergey Shoigu, Dmitry Kiselyov. You can “treat” them to a hearty smack or a nice kick, shoot them with a Ukrainian Stuhna-P or an American HIMARS. You are welcome to send in your ideas via the developers’ Telegram channel chat or email them at pytun.huylo@gmail.com.

According to psychologist Iryna Tarasova from the “Therapy of Win” centre that provides social and psychological support and rehabilitation to service members, this kind of pastime activity can be a good idea for the player’s psychological wellbeing because their interactions with anti-heroes are actually aimed at alleviating stress.

“Firstly, all of the aggression toward the enemy that the player has been trying to suppress eventually piles up and finds its way out through frustration, and the game provides a perfect virtual target for those negative emotions,” Iryna says. “The important thing is that the player feels in control of their interaction with the enemy. For instance, the character selection option puts the player in control of their emotions, as it helps them find the best match for the image of the aggression trapped inside.

“Secondly, physical interaction helps reduce stress, so making your body involved in the process is a rather common technique (e.g. when the player vigorously presses the buttons to strike their enemy). Switching the focus from the internal to the external can also be beneficial. When the anger toward our enemy has been piling up inside us for so long that we feel overwhelmed by it, the game provides us a safe place for releasing it. Such practice can help us make way for emotional healing, as it can provide more room for positive feelings that aren’t even related to the game. Moreover, the emotions we experience when we defeat our enemy help to bolster our position of strength, which is very valuable in current circumstances.”