BOSTON, Mass. /Massachusetts Newswire/ — This year VHL Family Alliance will be hosting its first annual special event in honor of International VHL Day, which will be declared in Massachusetts in May at the State House. Alex Anderson, a 13 year old boy from New Jersey, started this concept when he had a vision of hosting a worldwide fundraiser for VHL. Alex has already had a tumor in his ear at age four and four tumors in his retina, all resulting from his struggle with VHL. Alex is a VHL survivor and major fundraiser for the VHL Family Alliance. After deciding to hold Alex Jay VHL Day in his hometown this May, he decided to push further and get others involved. 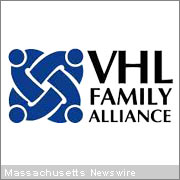 Chapters across the country are inspired by his vision and have signed on to host their own events and fundraisers. The Boston chapter and headquarters of the VHLFA, decided to help Alex’s dream come true by hosting an awareness event for VHL.

The VHL Awareness Benefit Concert will be held on May 23rd from 11-3 p.m. at the Parkman Bandstand on Boston Common. The free concert will have various performances by some of the best singers, dancers, and bands from the New England Area and feature music from Keith Richards, a rapper from New York who also deals with VHL. Among its talented acts is 12 year old, Yasmin from Boston, who will sing her inspirational song titled, “Be Yourself.” The event will also include performances by Hyde Square Task Force Latin Dance troupe, from Jamaica Plain, MA. The group is led by youth from an after school program “that develops the skills of youth to enhance their own lives and build a strong urban community.” These acts among others have volunteered their talents to support the VHL Family Alliance’s cause. In addition various sponsors such as Game Stop, J.P. Licks, Duck Tours, Black Seed Cafe & Grill, and many more have donated special items to be raffled off during the show.

The concert will be hosted by local comedian, Matt Donaher and join together everything from hip hop to alternative rock along with great raffle prizes, including a signed autograph by Celtics player, Tony Allen. The free concert will take place in the Parkman Bandstand located near the Boylston Street T station in the Boston Common. This event is dedicated to spreading the awareness of Von-Hippel Lindau disease and the importance of research in developing safe, effective treatment for this rare disease. The rest of the line up includes, Derek Adams, Katelyn Clampett, Blue Moon Harem, Jaxon Boom, Jennifer Behnke, Erin Marie & Its Edge Dance Troupe, Yoleisha and Ria.

VHL is a genetic risk factor for a number of tumors, caused by a tiny misspelling in one copy of one gene, the VHL gene. People who carry this flaw are at increased risk for tumors of the retina, brain, spinal cord, kidneys, pancreas, and adrenal glands.

VHLFA is a non-profit organization that provides information for families and physicians about this disorder and local and online self-help support groups for families affected with VHL. It is dedicated to improving diagnosis, treatment, and quality of life for individuals and families affected by von Hippel-Lindau disease. Endorsed by the BBB and ICA as one of the Best Charities in America. http://www.vhl.org.