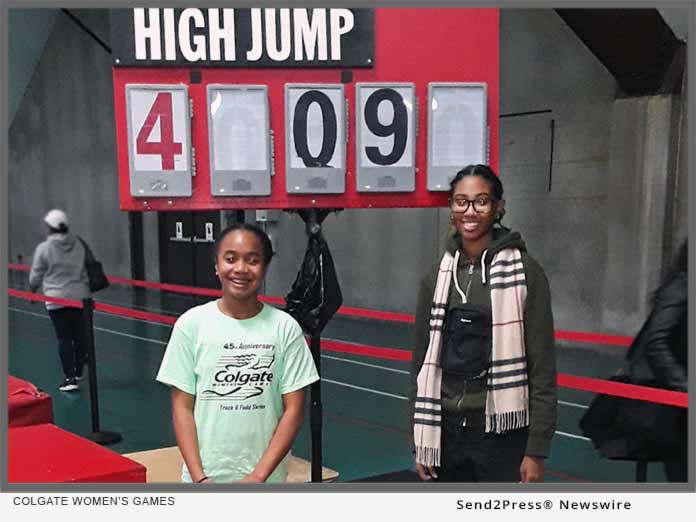 BROOKLYN, N.Y., Dec 27, 2018 (SEND2PRESS NEWSWIRE) — Rising young stars and returning champions from all over the East Coast shared the spotlight at the second preliminary of the Colgate Women’s Games (December 21-23, 2018), the nation’s largest amateur track and field series for women. Thousands of girls and women from first grade through college and beyond, many traveling from as far as New Hampshire, Massachusetts, Virginia and Georgia chose to celebrate Christmas weekend on the track at Pratt Institute in Brooklyn.

Meet Director Cheryl Toussaint said, “We’re so pleased by the overwhelming turnout of participants and their families this Christmas weekend in Brooklyn, cheering on their girls as we celebrate the 45th Anniversary Colgate Women’s Games. We saw improved scores and more exceptional performances in every division.”

Sunday Elementary B highlights included three double wins. Returning champions Amirah Nesmith of St. Helena Incarnation in Philadelphia, won the 55 meters in 7.63 and 200 meters in 27.97; and Da’Mira Allen of Chichester Middle School in Boothwyn, PA won the 400 meters in 1:02.29 and the 800 meters in 2:25.04. Kiara Davis of Wilbur Elementary in Bear, DE repeated both her record-tying jump at 4’9″ and 55 meter hurdles in 9.78 for two more wins.

Four preliminary meets and a semi-finals at Pratt Institute will determine who will compete at the finals at the New Balance Track and Field Center at The Armory, New York Saturday, February 2, 2019, where trophies and educational grants-in-aid from Colgate-Palmolive Company are awarded to top place finishers in each grade division.

Hopeful young track stars, parents, coaches and recruiters can find information about the program and follow results at https://www.colgategames.com/results.

This press release was issued on behalf of the news source, who is solely responsible for its accuracy, by Send2Press Newswire. To view the original story, visit: https://www.send2press.com/wire/east-coast-track-stars-celebrate-christmas-weekend-with-outstanding-performances-at-45th-anniversary-colgate-womens-games/