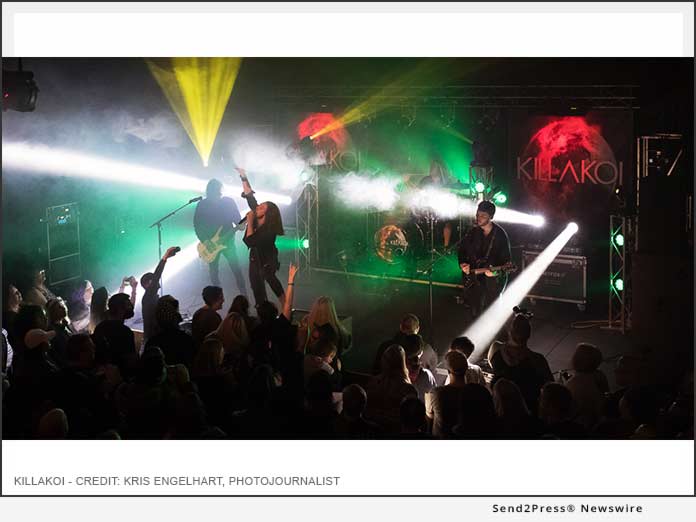 CHARLOTTE, N.C., May 15, 2019 (SEND2PRESS NEWSWIRE) — N.C.-based rock band, Killakoi, opened the inaugural Epicenter Festival. On May 9, 2019 Killakoi took the stage in the Epicenter Village for the early arriving festival campers. The festival was estimated to have an estimated 10,000 campers.

Since their inception in 2017, Killakoi has been taking the rock world by storm. It seems like there’s no stopping these four talented and hard-working musicians from making their dreams come true.

2018 was a banner year for the band as they released their debut EP “Pangea,” working with Sahaj Ticotin and completed their first national tour with From Ashes To New, as well as Badflower and Dead Girls Academy, who are also performing at the festival.

Killakoi dared to set an even bigger goal for themselves, to play Carolina Rebellion in 2019. It was a lofty goal for such a young band but they put forth an “if you can dream about it, you can do it” attitude and great things began to happen. Of course, Carolina Rebellion is no longer, but Epicenter Festival filled the void in Rockingham, N.C. for music fans from all across the country. The weekend festival included dozens of bands including headliners Tool, Korn, Rob Zombie and the Foo Fighters.

They were honored with the distinction of being the very first band to play the festival taking the stage for the Pre-party in the Rockingham Village Thursday evening.

Learn more about the band at: https://www.killakoi.com/

This press release was issued on behalf of the news source, who is solely responsible for its accuracy, by Send2Press Newswire. To view the original story, visit: https://www.send2press.com/wire/dreams-are-about-to-become-reality-for-charlotte-rock-band-killakoi/