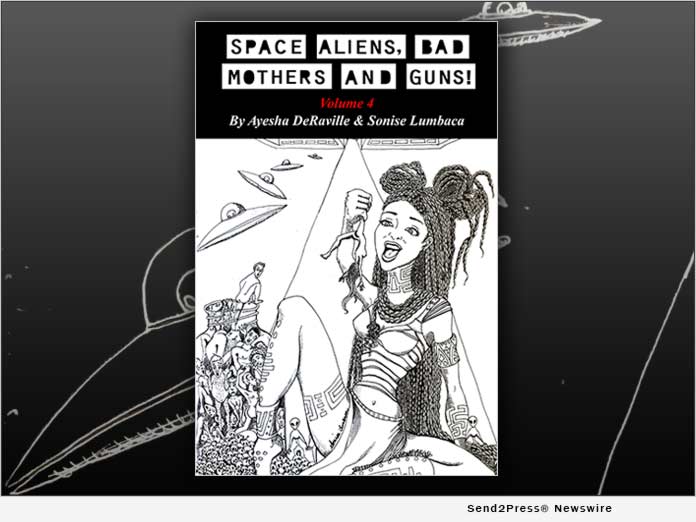 WILMINGTON, Vt., May 08, 2020 (SEND2PRESS NEWSWIRE) — “Space Aliens, Bad Mothers And Guns! Volume 4” (ISBN: 979-8622866586) has been released on Amazon. The twins, Ayesha DeRaville and Sonise Lumbaca (DeRaville Sisters), of DSMAN, LLC, are at it again, bringing their fanbase (and welcoming new readers) 14 new short stories in their fourth self-published novel.

The majority of their literary characters are women and focus on the human condition, highlighted in an anthology format, all delivered with a satirical twist.

Ayesha DeRaville, originally a native New Yorker, is a television professional who has worked on “Apprentice,” “Dancing With The Stars” and “Hillbilly Blood.” In addition to writing and producing she spends her time enjoying landscape photography in Vermont and planning epic adventures around the world.

Sonise Lumbaca is an Army war veteran, who served as both a Public Affairs and Communications Officer. Sonise draws her inspiration for writing and illustration from her love of traveling the world. In her spare time, she participates in cold weather activities and spends her time with friends and family.

In addition to their “Space Aliens, Bad Mothers and Guns!” book series, the DeRaville Sisters have independently written both fiction and non-fictional works to include, “Escape to Greener Pastures” by Sonise Lumbaca and “The Bottom Line: A Guide to Running Your Own Reality Production Company,” by Ayesha DeRaville.

Their other ventures include an online magazine, “Space Aliens, Bad Mothers And Guns!: The Magazine,” attending fanbase events and creating additional content to include animation shorts, with a graphic novel in the works.

This press release was issued on behalf of the news source, who is solely responsible for its accuracy, by Send2Press Newswire. To view the original story, visit: https://www.send2press.com/wire/more-space-aliens-badder-mothers-and-what-about-those-guns-strong-women-take-on-invasion-in-4th-outing-of-book-series/

Legacy Launch Pad Publishing Releases Guidebook for Mothers in Technology: PRESSING ON AS A TECH MOM