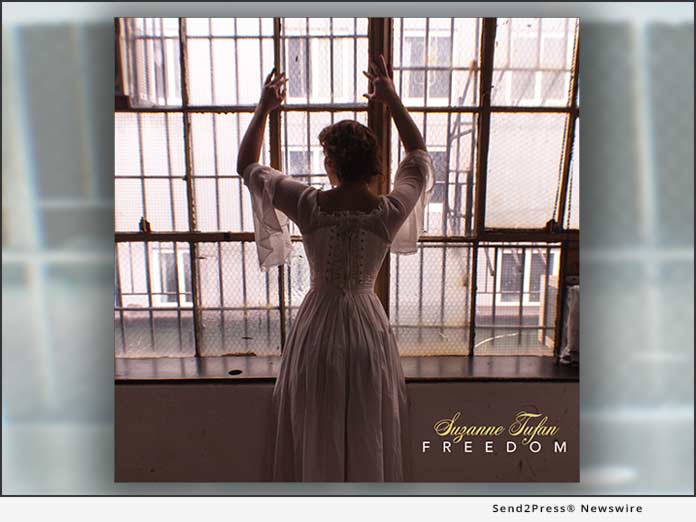 NEW YORK CITY, N.Y., Nov 08, 2019 (SEND2PRESS NEWSWIRE) — INDIE CHAMELEON, a new innovative record label that puts the artist at the core of everything they do, has released their first fully produced single and music video combination with the song available October 25 and the music video released today.

The single is called “FREEDOM.” Available now at http://www.indiechameleon.com/music.html

Suzanne Tufan, the singer-songwriter behind the song, brings the strength and power of the female voice to the forefront with her authentic lyrics and vulnerable sound. Known for her indie folk pop, her unique style and approach to writing harkens back to the spirit of 60’s singer-songwriters like Mitchell and Baez.

Tufan excels in portraying truth in the expression of her music. Her goal with releasing this song is to allow truth-telling of her own experiences to create a vulnerable space for fellow women to open up about their own desire for true agency and freedom from the patriarchy of modern society.

MORE ABOUT THE ARTIST

Suzanne Tufan is an actress / singer-songwriter / playwright hailing from the West Coast and currently based in Portland. Her music credits include the release of the self-titled album, “Suzanne Tufan,” on Bandcamp which is a collection of acoustic compositions about seven years ago. In 2013, she formed and was part of the band A Year Afar and eventually released the EP “Better Life” in 2014 which can be found on Spotify for your streaming pleasure.

MORE ABOUT THE COMPANY

INDIE CHAMELEON is an indie record label that prioritizes the idea that artists have power over their own work despite the trends of the current music industry. As an independent record label, we are dedicated to developing artists who write and perform original music.

We opened our doors in early 2018 with main offices in both Seattle and New York. We specialize in producing raw, minimalist material and have A-list collaborators within the company to act as resources for both our signed-artists and projects we produce. As a company, our motto is artists for artists and as artists ourselves we look to collaborate with others who prioritize the artist above all.

This press release was issued on behalf of the news source, who is solely responsible for its accuracy, by Send2Press Newswire. To view the original story, visit: https://www.send2press.com/wire/new-record-label-built-by-artists-for-artists-to-protect-independent-music-releases-its-first-music-video/