WEYMOUTH, Mass. /Massachusetts Newswire/ — “It Happened In Boston” (ISBN: 978-1733084703), a new children’s board book introducing the history of Boston to young readers, is also the first in a series by Weymouth-based Great Pond Press, a publisher of books specifically created to interest children in history from a very young age. 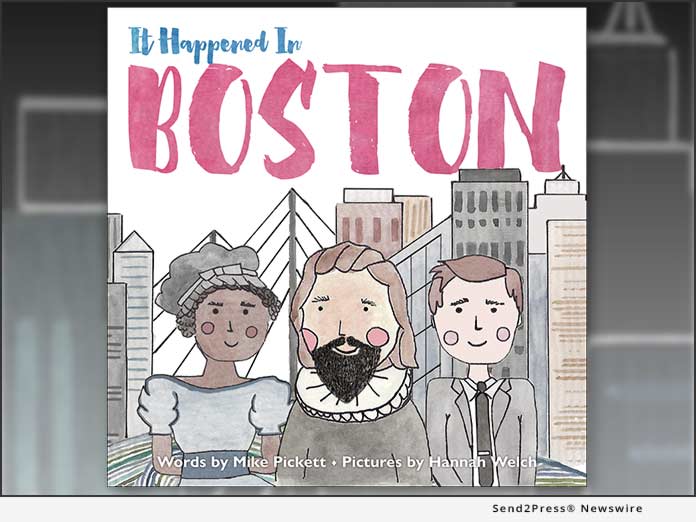 “If you know the history of a place, you can’t help but fall in love with it a little,” Mike Pickett, founder and publisher of Great Pond Press, said. “I think that kids should grow up loving where they are from.”

Pickett, originally from California, relocated to New England in his twenties and it was Boston’s rich history that won him over.

“When I first moved here, I couldn’t believe that I could be standing in the same place where the Boston Massacre, the Boston Tea Party or the Battle of Bunker Hill took place. It made me feel connected to those events.” Pickett says that he wants children to feel that kind of connection to history.

“I hope that kids can understand that history isn’t something that happened in some far-off place or time,” he said. “I hope they know that wherever they are, that place has a history and they are a small part of it.”

“It Happened In Boston” highlights episodes from Boston’s history ranging from the city’s founding by John Winthrop to Paul Revere’s famous midnight ride to the ambitious and overbudget Big Dig. Recounted in a way that is both appropriate and engaging for children ranging from newborns to kindergarteners, “The book focuses on the good stuff,” Pickett said. “There will be plenty of time for children to learn about the rest of the city’s history as they get older.”

Pickett adds, “One of my favorite writers is David McCullough, and I recently heard him say that we are raising historically illiterate children. I hope that our books can start children on the path to being historically literate.”

Pickett holds a law degree from the University of Texas at Austin and currently works as an attorney in Boston. But before going to law school, he earned a master’s degree in Publishing and Writing from Emerson College. “Starting Great Pond Press has allowed me to finally put all the knowledge that I gained during my master’s degree to good use,” Pickett said.

“It Happened In Boston” is available on Amazon and at https://greatpondpress.com/.

For more information or for a review copy of “It Happened In Boston,” please email mpickett@greatpondpress.com.