Home US National News Ready for Next Tax Season? New Tax App for iPhone is Designed for People with Homes in More than One State
SHARE
Facebook
Twitter 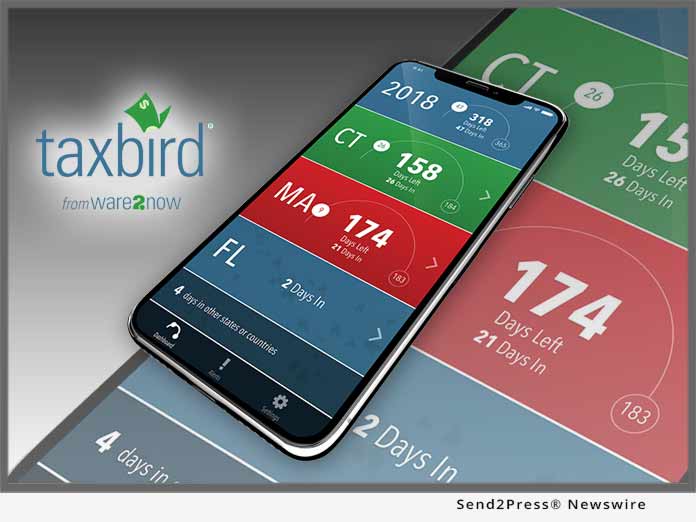 NAPLES, Fla., Apr 24, 2018 (SEND2PRESS NEWSWIRE) — With this year’s tax season in the rear-view mirror, there’s no better time to start prepping for the next round. TaxBird – a new tax app developed by ware2now, LLC – helps people with homes in more than one state ensure they don’t exceed their residency threshold. It’s useful to tax professionals and estate planners too.

Tracking residency is more important than ever due to a new federal tax reform, which caps the amount taxpayers can deduct in state and local income, sales and property taxes to $10,000.

How does it work? Once downloaded to a smartphone, the app runs in the background and tracks location in real time. Throughout the year, updates and warnings are sent as users approach a threshold. At the end of the year, it generates a report that’s easy to understand and valuable in case of an audit.

Jim Simon, co-founder of ware2now LLC and co-developer of TaxBird, resides in Westport, Conn. and Naples, Fla. He says this app came about when his business partner, Brian Ochs, learned that he was tracking this information in Excel. Brian said, “Let’s build an app for that.”

“It’s been a lot of fun,” Simon says. “We launched the app in October of last year and are already working on the next version, which will include a planning module.”

Simon says there are some similar apps out there, but they’re more complex and cost more too. TaxBird was designed with simplicity in mind, using bold fonts and straightforward displays. And, after a free 30-day trial, a subscription is only $19.99 per year.

Download the TaxBird app from iTunes (an Android version is being developed) and from https://www.taxbird.com/.

About ware2now, LLC:
Founded by successful tech entrepreneurs, Jim Simon and Brian Ochs, ware2now LLC developed TaxBird, a mobile application that tracks how many days people spend in each state for tax purposes. Previously, Simon and Ochs founded Spire, a data marketing and analytics company focused on grocery retailers and consumer packaged goods. They sold Spire in 2014 to Datalogix, which was acquired a year later by Oracle.

This press release was issued on behalf of the news source, who is solely responsible for its accuracy, by Send2Press Newswire. To view the original story, visit: https://www.send2press.com/wire/ready-for-next-tax-season-new-taxbird-app-designed-for-people-with-homes-in-more-than-one-state/