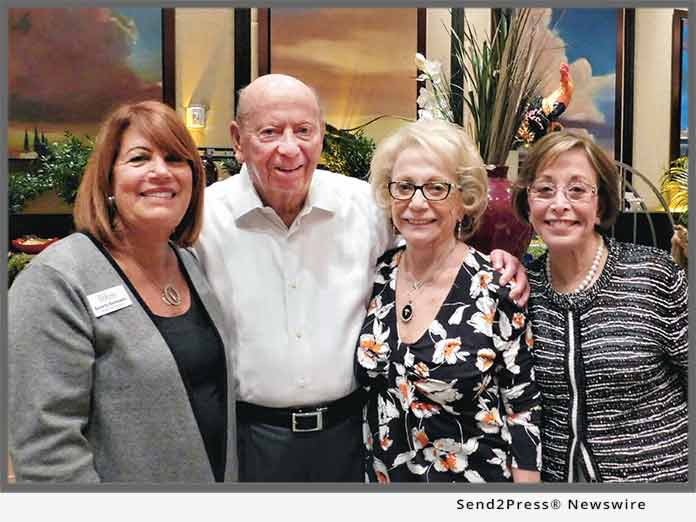 BOCA RATON, Fla., Oct 23, 2018 (SEND2PRESS NEWSWIRE) — The Pap Corps Champions for Cancer Research has announced a $100,000 matching gift challenge by The Yass Family. This gift will be utilized to enhance the 2018 Dr. Kevin Berkowitz Memorial End of Year Giving Campaign, which will be directed towards melanoma research at Sylvester Comprehensive Cancer Center at the University of Miami Miller School of Medicine. Jerry Yass made this generous gift during the recent Pap Corps Presidents’ Meeting at Boca West Country Club in honor of his late wife, Sybil, who died in 2001 from melanoma.

“We are tremendously grateful to Jerry Yass and his family for making this matching gift to us,” said The Pap Corps’ CEO David Bakelman. “Jerry is one of our most dedicated and generous Pap Corps members, and we are honored that his donation will encourage others to give during our critical end of year giving campaign.”

Jerry Yass, an active member of the Boca Friends Chapter of The Pap Corps, moved the audience of over 400 during his emotional speech at the Presidents’ Meeting when he read a poem he wrote about the challenges a family endures when a loved one is battling melanoma.

“South Floridians need to be better educated about the risks of skin cancer, especially melanoma,” said Linda Moses, President of The Pap Corps. “In addition to raising research funds, we hope this end of year giving campaign will raise awareness about prevention, the need for regular skin cancer screenings and the tremendous work doctors at Sylvester are doing to advance new treatments.”

During the past 30 years melanoma rates have been on the rise. In 2018, it is estimated that 91,270 people will be diagnosed with melanoma, and that 9,320 will die from this form of skin cancer. Early detection and advanced treatments are critical to increasing survival rates. Sylvester offers a world-class melanoma surveillance and detection clinic, immunotherapy clinical trials, advanced expertise in immunohistochemistry and tumor markers. In addition, Sylvester is one of the few institutions to offer reflectance confocal microscopy (RCM) which differentiates melanoma from less serious skin lesions.

Dr. Kevin Berkowitz, a generous supporter of The Pap Corps, established the first end of year matching campaign in 2014 and it now continues in his memory.

“Each year, we have focused our attention on a specific cancer for end of year giving,” said Beverly Berkowitz, mother of Dr. Berkowitz and Vice President of The Pap Corps. “This concerted effort has united our members and brought attention to the tremendous influence The Pap Corps has to facilitate research at Sylvester. We encourage everyone to learn more about melanoma and to make a donation towards the creation of new lifesaving treatments.”

About The Pap Corps:

Since its founding in 1952, The Pap Corps has donated more than $110 million to Sylvester Comprehensive Cancer Center at the University of Miami Miller School of Medicine, including a historic $50 million pledge in 2016 dedicating The Pap Corps Campus at Sylvester in Deerfield Beach. The Pap Corps derives its name from Dr. George Papanicolaou, a pioneer in cytopathology and early cancer detection, who introduced the world to the revolutionary ‘Pap’ test. A small group of women began the organization to support his efforts, and over the decades it has grown into an organization of over 20,000 men and women, in over 50 chapters, who raise funds to support all types of cancers.

This press release was issued on behalf of the news source, who is solely responsible for its accuracy, by Send2Press Newswire. To view the original story, visit: https://www.send2press.com/wire/the-pap-corps-receives-100000-matching-gift-challenge-by-the-yass-family/