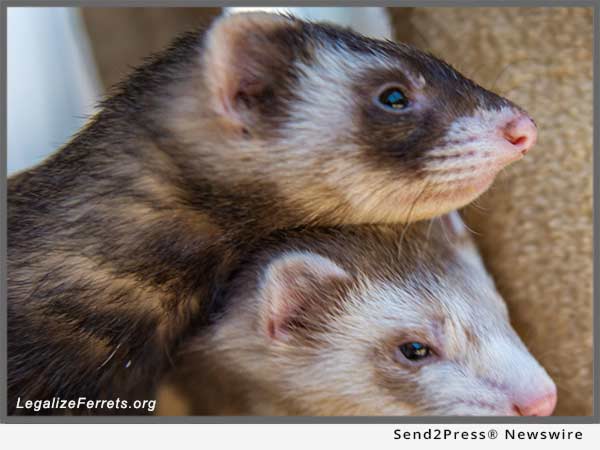 LA MESA, Calif., Apr 04, 2017 (SEND2PRESS NEWSWIRE) — Legalize Ferrets, a California organization that continues to advocate for ferret legalization in the state, has a watchful eye on The California Fish and Game Commission this month. Why? The commission is set to consider issuing permits for ferrets during its April 26, 2017 meeting in Van Nuys, Calif.

Currently, ferrets are legal in 48 states – California and Hawaii are the exceptions. But ferret lovers are hopeful that California is ready to join the ranks.

“Previously, the commission rejected a proposal to remove ferrets from the prohibited species list,” Pat Wright of LegalizeFerrets.org says. “It said doing so would remove ferrets from its jurisdiction and that ferrets could pose a threat to wildlife.”

However, prior to 1985, the commission had issued permits for neutered male ferrets. So, ferret advocates countered the recent proposal rejection asking it to revisit its previous position. The commission agreed to study and hear the proposal.

California ferret lovers have submitted an open letter to the commission which highlights the commission’s two objections and provides ferret advocate responses.

In fact, Wright shared that a ferret was recently confiscated in Arroyo Grande. It had gotten out and a neighbor turned it into local animal control.

“After a big deal and lots of tears the ferret was returned to the owner and she was given 30 days to get rid of it. This is just another example of the futility of the ferret ban,” Wright says. “There’s not a single documented case of feral ferrets in the United States. It’s time that California ferret owners have protection from confiscations and possible euthanasia of their pets.”

To read the open letter to the California Fish and Game Commission and to learn more about LegalizeFerrets.org, visit: http://www.legalizeferrets.org/.

This press release was issued on behalf of the news source, who is solely responsible for its accuracy, by Send2Press Newswire. To view the original story, visit: https://www.send2press.com/wire/ferret-owners-hopeful-as-california-fish-and-game-commission-consider-issuing-permits-for-ferrets/